The Rupnagar District is one of the oldest cities of Punjab. It carries a historical importance as it is related to the ancient Indus Valley civilization which developed in this area about 5000 years ago. Apart from it, this city is situated at the bank of the Sutlej River which is one of the five oldest rivers of the old undivided Punjab. A historical meeting was held at Ropar (Rupnagar) in 1831 between Maharaja Ranjit Singh and William Bantick, the Governor of India, at the bank of river Sutlej. Two ‘Durbars’ were set up on opposite sides of the river. There is a historic site built at Ropar where the meeting took place and it is known as ‘Rendezvous’ or ‘Shahi Mulakat’. Rupnagar District has many Religious/ Historical places. Like, Shri Anandpur Sahib and Chamkaur Sahib, both are the sub-divisions (Talukas) of this district. As “Khalsa Panth” was formulated by Shri Guru Gobind Singh Ji, the tenth Guru of Sikh religion, and his two sons namely Sahibzada Ajit Singh Ji and Sahibzada Jujjhar Singh Ji were martyred in the battle between Mughals and Sikhs at Chamkaur Sahib. Apart from the said places, there is the highest gravity dam in Asia namely “Bhakra Dam” situated at Nangal which is also a part of this Rupnagar district. At present, there is one Subdivision of Rupnagar namely Anandpur Sahib, as remaining i.e Kharar, and Dera-Bassi is merged in SAS Nagar (Mohali) Session division which is newly created in December 2015. 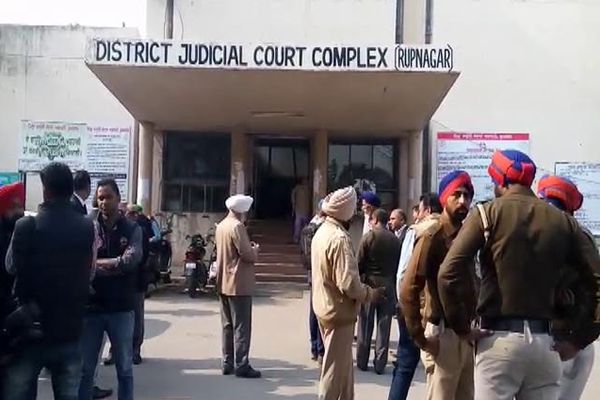 The Rupnagar District was formed as Independent Sessions Division on 1st august 1972 and Sh. Harbans Singh was the first judicial official appointed here as Senior Subordinate Judge, and Sh. O.M. Saini was the first District & Sessions Judge. The 1st building of District & Sessions court was near the Sirhind Canal and another building of the subordinate courts was situated in the middle of the city Ropar. Thereafter, All the Judicial Court were shifted to the newly constructed Judicial Court Complex which is situated in the Mini Secretariat and presently also functioning at the same place from 10 June 1983. The old building of the Sessions Court and subordinate courts has been since demolished and now there are no signs of the building remains. Though no documentary record regarding the construction of the above-said building is available, as told by the old people, the courts building were initially constructed for the residencies of the Higher British Officers of the time and then converted into the Judicial Courts.

When it comes to the selection process, the candidates have to take up a written exam / Interview. Selected candidates will be paid a handsome salary (as per Govt rules). The type of questions that are asked in the technical interview round differs from one position to another. There are multiple steps for the selection process for the posts of Stenographer, Clerk, Peon, Process Server, Gardner, Chowkidar, Liftman, Sweeper, Watchman, Chauffeur, Cook, etc. in the Rupnagar District Court. The procedure is as follows

We advise to you for other Rupnagar Court Recruitment 2021 and selection process please read given official recruitment notification carefully before apply.

Know the current status of your case by Return SMS

Important: Case Number Record (CNR) is a unique Identity Number of each case, which remains constant. All the Advocates, Litigants, and stakeholders are requested to ascertain the CNR of their respective cases from the concerned Courts and to refer the same for all future references.